skip to main | skip to sidebar

Date: Friday 30th December 2016
Weather: Slightly warmer than the other days. The day started with a beautiful blue sky however, by mid-afternoon, that had changed to an overcast sky.
MP3 track of the day: Gangnam Style – PSY 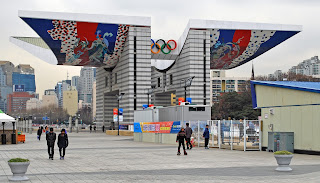 Due to having a very late night last night, I got up at around 9 am however, I got ready quickly and left my hotel, walking east, at 9:30 am. I decided to visit the market close to my hotel which I'd visited late on my first night here and yes, this time more of it was open. I ordered some market food which was expensive and not very nice at all – it needed some sauce. Once that 'must do experience' was over, I proceeded to my next culinary 'must do experience'. Issac toast is a fast-food restaurant selling, you guessed it, toast. It is apparently a very popular breakfast and so I ordered the ham and cheese toast which, was cheaper than the market food, and tastier … but only just. The bread was ridiculously sweet making it quite hard to stomach. With that done, I found myself within the Dongdaemun area which had a nice hill and a lovely church just behind it. I climbed the hill to get a panoramic view of the city below. This part of the city was certainly very modern due to the beautiful new shopping centres and skyscrapers which lay before me. It was so modern that, when I went to the toilet in one of the 'posh shopping centres' there wasn't a 'poo bin' (South Korea's plumbing isn't spectacular therefore, tissue paper of any sort is not allowed to be flushed down the toilet … meaning that toilets have bins where people put their used tissue … lovely).With little to see in this area, I didn't stay long and soon I was on an underground train bound for an area of Seoul called Gangnam. Once again, pushing onto the train seemed the order of the day and when I showed my shock through suggestive gestures, a Korean woman just laughed at me as if to say 'this is Korea'.

Now, you may have heard the name 'Gangnam' before. It was, of course, the name of the 2012 hit-single by PSY. The song has over 2.3 billion views on 'You Tube' and is a musical assault on the hollowness of Korea's richest neighbourhood – Gangnam – and the phoniness of those who aspire to live here. As the song put the area in a bad light, you would have thought that any mention of the hit 'Gangnam Style' wouldn't have been mentioned within these modern streets and yet, as I exited Gangnam station, there was a public piece of art dedicated to the song. With that photographed I proceeded along the main street, which looked as though it had been transported directly out of New York. The buildings were high and the advertising was enormous. What's more, even the side streets here didn't look like they were from the 1950's; everything seemed pretty new.

Once I'd had a good look around, I'd purchased some McVities biscuits - which I couldn't get in Japan - and found the restaurant I'd wanted to have dinner in however alas, it didn't open for another hour and a half. I therefore went to a 'Taco Bell' restaurant which, all of my American friends praise highly (however, I couldn't see what all the fuss was about), before deciding to leave the area determined to come back to my restaurant. I would be leaving to visit South Korea's Olympic Park however, before that, my guidebook had highlighted the fact that Gangnam housed Samsung's headquarters and with that came a store called 'Samsung D'light'; a store showing the electronic products of tomorrow. I went in and discovered some crazy stuff including a round cylinder PC and a beautiful interactive plasma TV. I also tried on some virtual glasses which were amazing! Once I'd finished playing I headed back into the underground station and off I went to the Olympic park.

I'm not sure if it was all the 'inside', then 'outside', then 'inside, then 'outside movement … or all of the train journeys … or the differences in temperature I was experiencing however, I was starting to feel unwell. I had a huge headache which would occur every-so-often. It was weird but, sometimes I would feel dreadful and then, twenty seconds later, I would feel fine. I therefore decided to make my visit to the Olympic Park brief before returning to Gangnam for something to eat to see if that made me feel any better. South Korea hosted the 1988 Olympics and at its centrepiece was the 'Olympic Peace Gate'; a colossal gate with two huge wings painted in a traditional Korean style. I marvelled at its beauty and took a lot of photos. Feeling better I walked through the gate and past an ice rink where a lot of skaters were having fun. I proceeded to where the flags of all the nations who took part were placed. Being that 'peace' was the overall theme for the Olympics, I was surprised to find that the North Korean flag was missing. There were also a couple of interesting flags including East Germany, the USSR and two countries that I have never heard of; 'Figi' and 'Great Bretan'. Still, if I was using the Korean alphabet I'm sure that I would have trouble to spell a single word, let alone country names. Once I'd seen the flags I walked back through the peace gate and back into the underground. I was back in Gangnam within twenty minutes.

I made my way to the restaurant I'd wanted to eat at earlier and discovered that, though it was open, I was the only diner. I still sat down and ordered. This restaurant was famous for fried chicken and so I ordered the 'fried chicken with soy sauce and spices' … which was delicious. After paying I left Gangnam for the final time and proceeded west to an underground stop called Noryangjin which, I thought, would be a good place to see the Hangang; Seoul's main river. Within the station I met a tourist information officer who explained to me that I'd chosen poorly; he showed me photos of a 'rainbow bridge' which was a few stops north-east, on the other side of the river. I didn't ignore his advice; instead, I saved it for later. I went back into the underground station and kept going west due to the fact that, before arriving in Seoul, I'd read my guidebook and I'd highlighted a small island two stops west of where I currently was. The name of this island was Yeouido.

Though in it's past this island wasn't particularity favoured among Seoulites, it has grown in appeal and today it has a rather modern feel to it due to a lot of apartments. I exited at the island's most southern station and walked twenty-or-so minutes north-east to where the island stopped. The walk wasn't that interesting however, once I'd hit the northern coast the night view over the river and into the heart of Seoul was worth the effort. What's more; on the key there were lovely lights, food stalls and a Christmas market. I had a good look around, purchasing some more spicy Korean food and visiting the Christmas market where there were quite a few things I could have purchased. This view over the Hangang river has become one of the highlights of my entire trip because it was so unexpected. Sadly though, I still wasn't feeling great and so I made my trip short. I went away from the coast and into Yeouinaru station; from there I went back to Myeongdong to do a bit of last minute shopping.

Once I'd finished in Myeongdong, I really should have gone back to my hotel due to how I felt and the fact that I had to be up at 4:30 am tomorrow to get a bus to the airport. Annoyingly this 'rainbow bridge' was still playing on my mind and so after umming and arring, I decided to try and find it. I got to the station I was told to go to by the tourist information officer however, after exiting, I discovered that it was such a long walk away I gave up and went back into the station annoyed that I'd wasted a good forty minutes.

I got back to my hotel late again and so, all of the restaurants were closed. I therefore had no option and went back to 'Tom and Tom's cafe' for a lasagne and a lovely cheesecake. As I headed back to my hotel I stopped, for the final time, at the local convenience store and bought every Twix he had left (seventeen of them to be exact). With that I went to my room, ate my dinner, took some tablets and packed for tomorrow. It was almost midnight before I got into bed and I would have to be up at 4:30 am tomorrow. Seoul, through its mix of old and new, had half killed me; I wasn't feeling very well, I was tired and yet … I'd achieved a lot in three days and I'd had a good time. Plenty of time to rest once home.

Make the most of your time on Earth

Matt
Nine years working for a local authority; Four and a half years achieving my degree; I've decided its time to see the world!