skip to main | skip to sidebar

Date: Saturday 31st December 2016
Weather: Due to leaving South Korea at 8 am, I had no idea what the weather was like. Back in Japan, it was overcast with a little rain.
MP3 track of the day: Gangnam Style – PSY 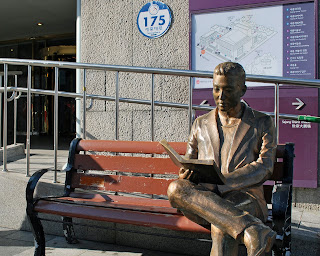 Though I knew it would happen, I still wasn't ready for my 4 am alarm. Still, fearing that I would miss my flight I got up, got ready and headed out into the night. With my suitcase trailing behind me, I followed the instructions given to me by the hotel staff and found the 'airport bus' stand with relative ease. Annoyingly, my hotel had told me that the first airport bus started at 5:30 am, whereas the sign here stated 4:30 am. With an hour and twenty minutes drive ahead of me, I only had an hour and forty minutes to clear check-in, baggage, security and immigration; an earlier bus would have been very handy.

The airport bus service was every fifteen minutes throughout the day and so I didn't have to wait long; and neither did I have to wait alone. With me was a large group of South Korean tourist I presumed were all heading off together. What was annoying was that, when I turned up, the group only had five members. By the time the bus turned up the group had swelled to around twelve and all seven of the new members felt that it was fine to push in front of me. Fortunately there was enough room on the bus for all, but only just. After another three or so stops the bus stopped stopping due to being full, leaving confused and worried passengers waiting for another bus.

Whilst on the bus I decided to reflect on my trip to Seoul. I would have gone to sleep however, the old lady next to me decided to use this journey to call EVERY LIVING RELATATIVE she knew … at 5am! I am glad that I came to Seoul. The experience has been 'full on' and I wished that I'd had another couple of days; not to see any more stuff, but to take my time. If you want to experience Asia, but only have a week-or-so to do it in, then I think Seoul is a pretty good place due to its bizarre mix of extreme modernisation, and poorer areas. It is a city where South East Asia has crashed into Japan; there is rubbish down all side streets with open-tent restaurants and yet, everyone pays for everything by card. For me though, I prefer South East Asia AND Japan because they are separate. The variety of food is fantastic and Korean food, though tasty, is not for me due to the sheer amount of spice. The biggest let down for me were the people. I'm not sure if it is because I'm in a big city – and I find most people in a big city are in more of a rush than people in rural areas – but I found the people to be very rude and unhelpful. Even when I was spending money, I felt as though I was a nuisance to be moved along quickly. Throughout the trip, I really missed Japan's level of customer service. Also … no Soulite smiles ever!

My thoughts ended as I approached Incheon International Airport. Amazed at the size of the place I went in with an hour and forty minutes until my flight departed. For some unknown reason, I'd forgotten that today was the last day of the year. I'd thought that, given the time was 7 am, the airport would be pretty quiet. It was nothing of the sort. I raced to my check-in area before queuing up to hand in my baggage. The line backed on itself at least five times though, there were eighteen baggage hand-in desks. It took about twenty minutes to get rid of my luggage.

Incheon International Airport had been voted the best 'international airport of 2016' and it's easy to see why. Unlike Seoul, everything was well organised, there was lots of signs and people did queue properly. Sadly though, through back luck, it seemed that whenever I had an option of a 'lane' I always chose the longest. This meant that I finally got to my boarding gate ten minutes before boarding. I quickly went to the toilet and spent the last of my 'Wong' on some over-priced Cadbury's chocolate and a bottle of water.

Once on the plane I eventually relaxed. Due to intense cloud cover, the plane experienced more turbulence than the flight going to South Korea. Still, I sat down and ate my breakfast – a hot dog thing – plus I watched most of 'The BFG' before the flight landed safely in Sendai. Surprisingly, Japanese immigration was terribly organised. There was one officer assigned to a long line of foreign nationals, one officer for a medium-sized line of foreign nations with special permission to live in Japan (that's me) and THREE offers for the six Japanese nationals who alighted the plane. The situation was so bad that foreign nationals from the first queue ignored the lady who had organised us and just joined any queue. It took an immigration official to actually come out from behind his desk to get everyone back in line with the promise of a more even spread of immigration officials per traveller. By the time I'd got to 'baggage reclaim', my luggage had travelled around the conveyor belt at least three times.

Once done I made my way to the train station and alighted a train bound for Sendai station. I then wasted no time in transferring to the train which would take me home. Once at my apartment, I unpacked, went out to do a little food shopping and had a relaxing – but no way near as nice as the hotel's shower – shower before going to sleep at 7 pm.

So another holiday over. Where next I hear you cry. Well, I am not sure at the moment but I do have a sneaky suspicion that it'll be somewhere in Europe.

Make the most of your time on Earth

Matt
Nine years working for a local authority; Four and a half years achieving my degree; I've decided its time to see the world!